In this session, Laurel Parnell shows how to use Attachment-Focused EMDR with trauma from early childhood separation and loss. Laurel Parnell is a certified EMDR therapist who is dedicated to motivating clients and clinicians in gaining understanding, balance and healing. You will walk away inspired to follow through with the concepts in your personal and professional lives.

In this video the client presents with anxiety, trouble sleeping and irritability related to a future move. She was distressed and tearful as she described her fears and concerns about leaving her friends and family to move to a city only three and a half hours away by train. Though she realized her fears were irrational-she knew she could and would keep in touch with the people to whom she was close-yet was still wracked with anxiety and fear of separation. She believed her anxiety was linked to early separation from her mother as an infant when she was taken to India to live with her grandparents, and then later returned to live with her parents when she was around two years old, losing her grandparents and extended family in India to whom she was attached. The client believed that her mother had a hard time attaching to her in part because of the early separation and also because she was working intensively in medical school during the client’s childhood. As a result of her mother’s lack of availability, the client reported feeling abandoned, lonely and angry as a child, even having temper tantrums and biting other children.

You will learn the EMDR techniques Laurel Parnell uses in order to find the target and help the client to feel grounded and at peace. 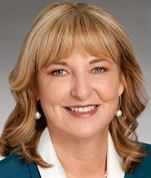 Laurel Parnell, Ph.D. is one of the world’s leading experts on EMDR. A clinical psychologist, she has trained thousands in EMDR in her international workshops. Dr. Parnell is the author of A Therapist’s Guide to EMDR, EMDR in the Treatment of Adults Abused as Children, Transforming Trauma: EMDR, and Tapping In: A Step-by-Step Guide to Activating Your Healing Resources Through Bilateral Stimulation as well as articles and a chapter in the EMDR Casebook. Dr. Parnell is at work on her newest book: Attachment-Focused EMDR: Healing Relational Trauma, which will be published by WW Norton in 2013. Dr. Parnell has served on the faculty of the California Institute for Integral Studies and John F. Kennedy University.

An EMDR pioneer and innovator, Dr. Parnell has immersed herself in the practice and development of EMDR since 1991 bringing a client-centered attachment-focused approach to the work. A frequent presenter at conferences, she has been interviewed for television, radio and print. She maintains a private practice in San Rafael, California.

PLEASE UPGRADE TO A MODERN BROWSER

FOR A BETTER EXPERIENCE. KEEP YOUR BROWSER UP TO DATE